Our son is very interested with Football.  He tried to sign up last year but  only 4th graders were allowed to  sign up to Jr. Dons football team.  So after the  tennis season  have ended, we signed him up for the  football camp  that Madonna High School offered.  They offered 8-week football camp for free so he  had fun with that one. 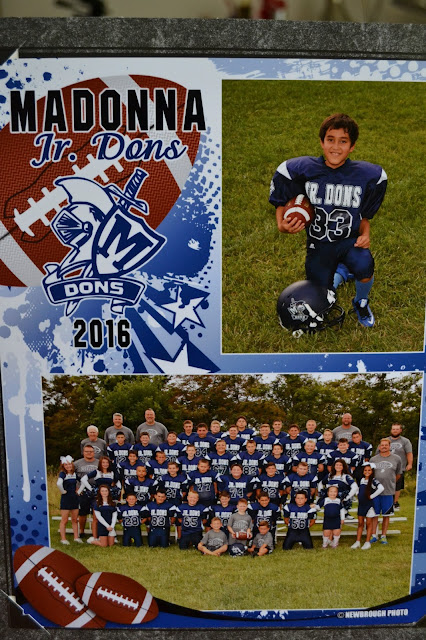 Another day of #football camp. #sports
A photo posted by Chubskulit Rose (@chubskulitrose) on Jun 8, 2016 at 10:15am PDT

This month, they began training for football, he is officially  on  the   Jr. Football team which  he is very excited about.  They have practice everyday of the week  so that is kind of tiring for him although we encourage him to stick to it since it would benefit him as he would be stronger.

Our future #football #star ... They are training today with girdle and padding. #sports
A photo posted by Chubskulit Rose (@chubskulitrose) on Aug 4, 2016 at 3:08pm PDT

Football is something I never thought I would let my son  play because based from the  games I have watched, it looks very dangerous but since he is passionate about it, I am letting him try it.  Besides, it's one of my husband's dream for EJ, to be a football player.  He said that he really wanted to play football when he was young but  since his Mom did not drive  and his Dad was always at work, nobody could drive him to practice and games.

Last day of #football⚽ practice this week. We bought him new pairs of #socks today. #sports
A photo posted by Chubskulit Rose (@chubskulitrose) on Aug 5, 2016 at 2:39pm PDT

He said he practiced and got good at it but when it was time to got to a game, he dropped out since nobody could drive him to the place.

She's ready for #football⚽ lol. Supporting her brother.
A photo posted by Chubskulit Rose (@chubskulitrose) on Aug 2, 2016 at 4:48pm PDT

I never could understand the rules of football  before but now, I am starting to get it slowly just listening to my husband and son talk about it.  Even my daughter  is excited that her brother is playing.

My little man needs new glasses, he can't #read these letters.
A photo posted by Chubskulit Rose (@chubskulitrose) on Jun 11, 2016 at 6:23am PDT

To play football, every player is required to have a medical certificate so we took him to Weirton Medical Center when they conducted their free  exam for it.  It is nice that  WMC does it annually for free.  We will need to buy him a sports goggles because he has an eye condition like me.

On our 13th wedding anniversary , we had to cut our  dinner date because  our son's team had their first scrimmage .  The team from Follansbee came  and played  with the Jr. Dons team. 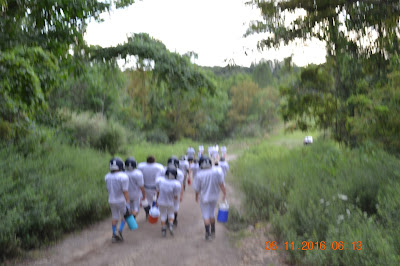 EJ was very nervous as he hasn't learn a lot of technique in playing the game but we told him to just enjoy the experience. 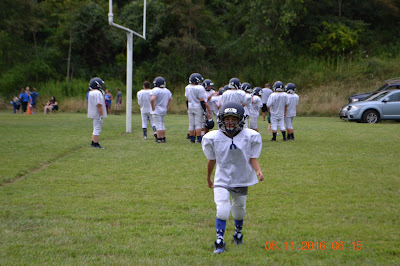 The coaches told  us that the team they are playing against has been playing for  few years now  as oppose to our team who had just began training this year so we might not get the result we want in a game but he said that it is okay because  they just want the kids to  experience how it is to play in a game. As expected, they did not win but  it was a a great learning experience. 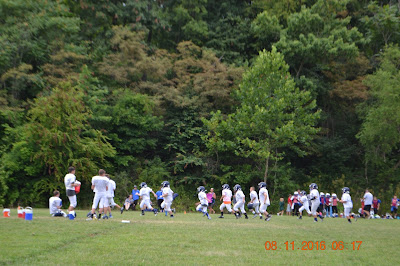 It was really nice  to watch.  I was surprised of how come I was.  Usually, I get really nervous when the kids gave to perform or play a game but this time, I was calm and  just  totally enjoyed watching. 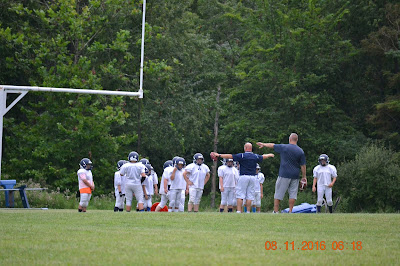 My daughter however was very nervous.  She was scared that  her little brother will get hurt but the coach assures us that no big kid will tackle  the small kids which was  a relief for me. 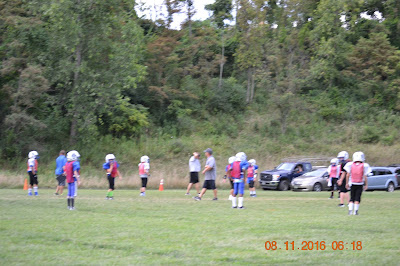 I am not sure if my so is suppose to be a wide receiver but he never got the ball, it was never pass  to him.  I think part of me was hoping that he would catch a ball and do a touchdown lol. 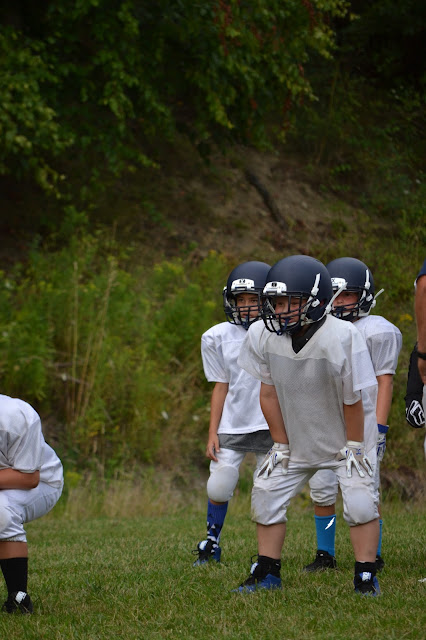 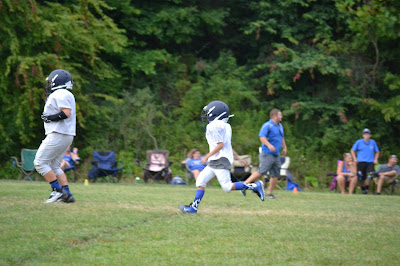 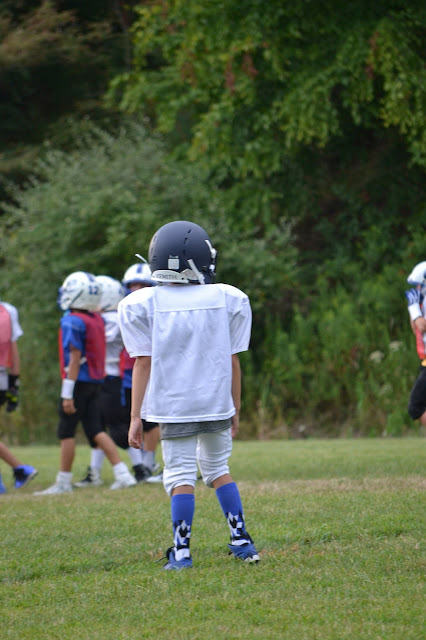 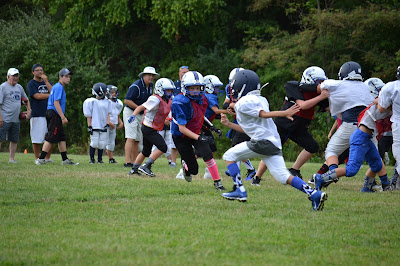 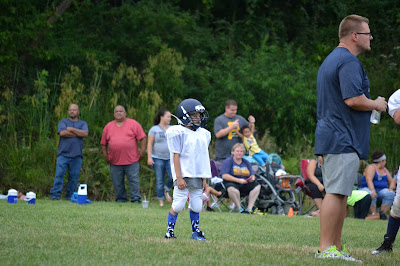 It's funny how serious other parents are from the other team.  They brought cow bell and  were yelling and screaming.  We, on the other side was just quiet and  was enjoying the game.  I cringed when I heard someone screams at their kids  to put the other kids in a hurt locker.  I mean, they are just kids, I think we should just chill  and let them play. 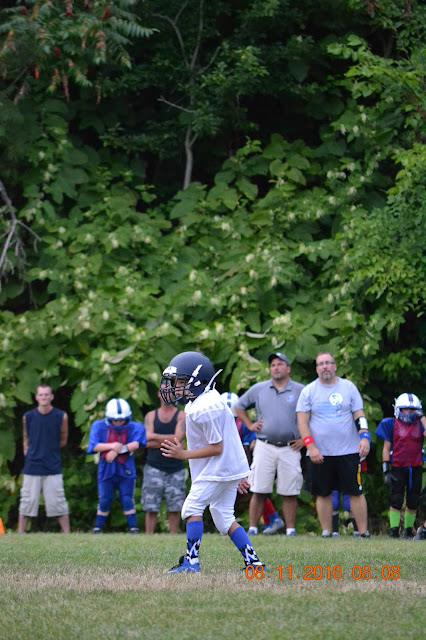 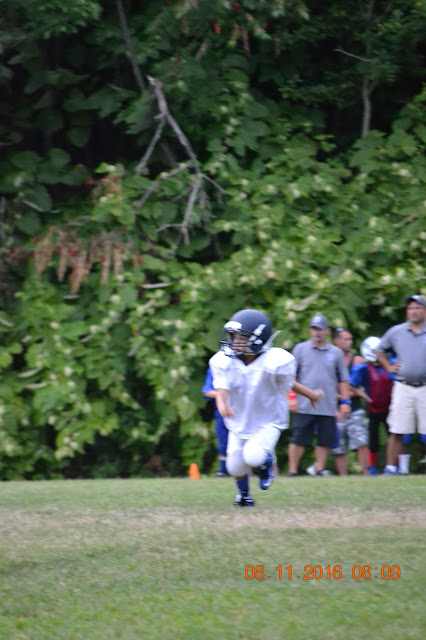 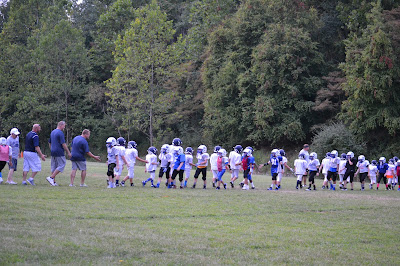 It was a really nice game to watch, what a way to end the day to our 13th wedding anniversary .  It was very special.  They will be having a game every Wednesday now so  they have been training every day of the week.  The kids won't be able to attend the tennis this Fall so we  have been bringing them to the tennis court and play with them every chance we get.  It's a great family bonding as well.
By Chubskulit Rose - August 29, 2016