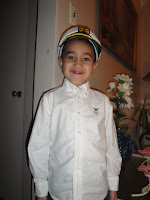 The kids had fun on the third day of the Catholic School's Week celebration, it was a Career Day theme. Students were encouraged to wear a uniform of the professions that they like or they admire.  My son wanted to wear a police man outfit but  I did not have much time to shop for  a costume so I  thought, why not wear one of his Dad's sailor hat.  I also put a Navy insignia on his shirt which made it perfect.

It was more for the small kids than for the big kids.  The little ones are so cute in their outfits.  Some  dressed as doctors, dentists, teacher, and many other professions.  Below is my son with her classmate who wants to be a policeman and  cake decorator.

My daughter  did not really dressed up but she  did some sketches and brought it in class as she represents an Interior Designer.  I took photos of the kids  with my phone but unfortunately, the internet connection in my phone is acting up so I can't upload the photo on this post.

On that the same day, I took my son to  the doctor  because he kept complaining about a pain in his waist.  I ignored it for a couple of weeks because  he always complains when it's time to go to school but since he was complaining a lot already, I thought of having him checked.  The doctor  performed some tests and even   had an XRAY to make sure but did not find anything wrong.  She came to a conclusion which is the same as mine, my little guy is stressed of going to school everyday.

Now that everything  was checked out, he is not  saying that his waist is hurting which is good because I got worried there for a while.  I am glad though that I brought him to the doctor, I don't want to second -guess and find out later that he has something seriously wrong on him.  Glad it turned out okay.